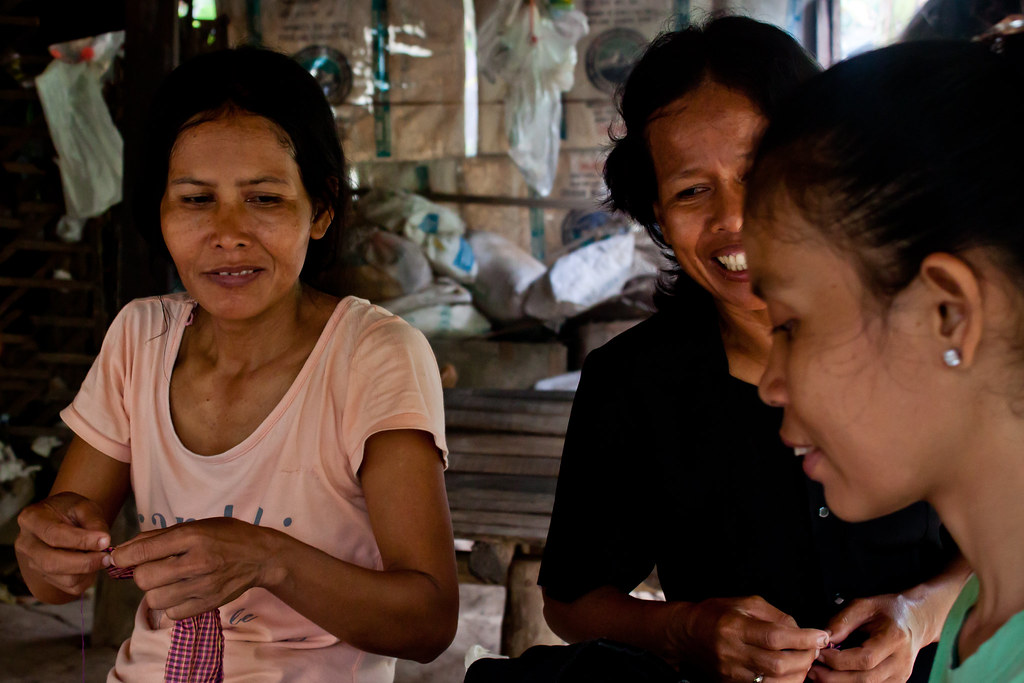 With a female population of  7,980,374 or roughly more than 50 percent of its entire population, Cambodia has the advantages of a young and rigorous workforce, which is pivotal for its future. According to the General Population Census 2019 by the National Institute of Statistics, the female labor force participation rate (aged 15-59 years old) is 77.9 percent compared to 85.8 percent of their male counterparts.

In terms of employment rate by sector and sex, women at a glance dominate the primary and the secondary sector with 53 percent and 19.7 percent compared to men with 53 percent and 18 percent, respectively. In the tertiary sector, the male employment rate is around 29 percent compared to 23.8 percent of female employment. These numbers provide a classic example of a developing economy. Most women work in the primary and secondary sectors in which subsistence and labor-intensive activities are heavily vested.

Garment and footwear manufacture is the key secondary sector in Cambodia. The exports of footwear and garments have reached US$7.97 billion in 2019, making this sector a powerhouse that sustains the Kingdom’s economy with an average rate of 8 percent for the past two decades. In this sector, women made up 85 percent of the more than 650,000 workers, most of whom are young from rural communities. These developments have changed the socio-economic dynamics in Cambodia, especially in the countryside.

The mobility of young girls and women from rural areas to the cities in the hope of having a better future is a crucial mechanism of bargaining power within households that engenders positive impacts on women empowerment.

When women join the workforce, generate income, and send remittances to their families, they often expect to earn trust from their families. Women can turn these actions into influence within their families and communities. This fact reveals how income generation activities that women undertake contribute to their renewed self-confidence and self-esteem. Moreover, this further enables women to have more autonomy and bargaining power over their household decisions. Being one of the prominent financial providers in their household, women can be a catalyst for change in gender roles within their families and even their communities. From being viewed as a caretaker of the family, a woman with the ability to earn money will have more means and opportunities to break free from social norms that have continued to deprive them of reaching their full potential.

Meanwhile, as income makers, women can also exert a specific influence on the political view of their family members as well as their communities at large. The situation enables them to be a key player in shaping the country's political landscape in the years to come. Moving from the rural areas, women workers are immersed in a novel environment full of diversities that include the survival instinct they will learn to adapt. The knowledge and experience they have acquired will find the way back to their families in the countryside.

The education and information they transmit to their families will play a crucial role in redefining how the old and new generations think about political affairs. There has not been yet an established casual relationship, but society has witnessed the gradual changes influenced by women workers in their households.

Furthermore, this is an enabling factor that encourages young girls and women to become active in public spheres. Also, empowered women are more willing to participate and engage in political affairs at national and sub-national levels. Once there are many women involved, there will be a change in conservative perceptions which disvalue women's political engagement. From my observation, women role models can play a significant role in aspiring and pushing young girls and women to the edge of their limits in challenging social norms that dictate their political involvements.

Also, the participation of women in income-generating activities usually has a positive effect on families' welfare. They have more autonomy over their decisions on reproductive healths, which are critical for their lives. Women are also more likely to spend on education for their children. This long-term investment will benefit the improvement of their livelihoods. The next generations will be living in an environment with more opportunities accessible for all. It, in turn, will contribute to the sustainable growth of their respective communities.

These scenarios are more of a visionary picture of our society when women are empowered. However, the actual situations in which women are encountering every day have not been this favorable. Among innumerable barriers that women have to break-through, there are a few noticeable challenges. First of all, the traditional view towards girls and education remains the most prominent obstacle, preventing female students from receiving proper education, which is crucial for their development. In addition to the inequality in education, discrimination against women in the workforce still noticeably persists. The unfair treatments demonstrated through the gender wage gap, sexual harassment in the workplace, gender respect, and unpaid labor have hindered their ability and capacity by capping their ambition and determination to grow. Realistically, it will take generations to eliminate these barriers, but the progress on gender equality we have witnessed paints a hopeful way forward.

Eventually, their economic empowerment can sustainably drive the political, economic, and social development in Cambodia. A striking example from the garment sector is the female workers have already altered our social dynamics. Challenges and potential solutions will continue to arise on par with the constant transformation fueled by their economic empowerment. The swift evolution in the roles of women will inevitably face criticisms and disapproval, which have been taking root in the traditional perceptions towards women. Regardless, the next generation of women has become more conscious about their rights and begins to stand up for themselves and other women. As long as we keep making progress, we will see women become a central pillar of our country's economic and social development.