Written by: Phit Phariya, a 4th year student majoring in International Studies at The Royal University of Phnom Penh 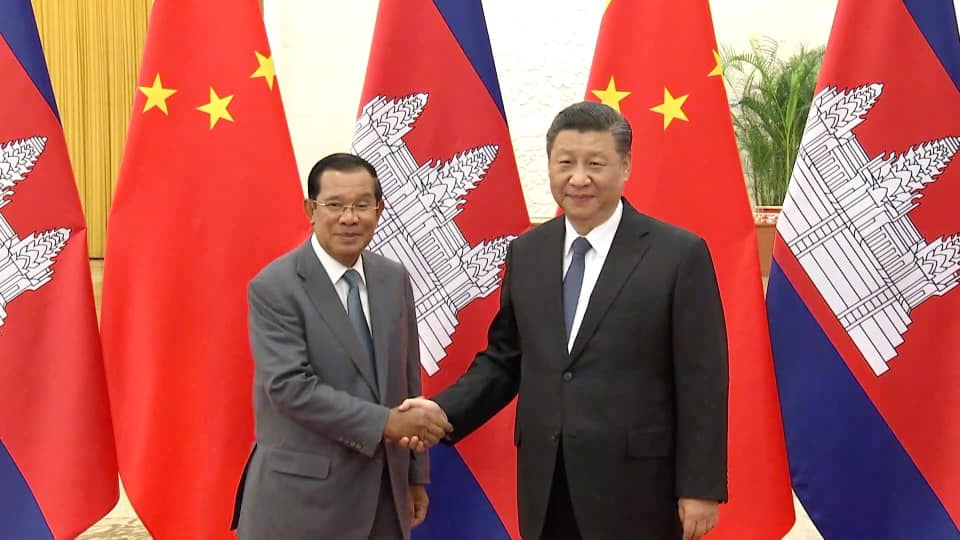 (Photo Credit: This photo was posted on the Facebook page of Prime Minister Hun Sen on February 5, 2021)

Sino-Cambodian diplomatic relations have been formally established since 1958. Since then, regular high-level exchanges have taken place between the two countries. Nonetheless, there shall be noted that at times, particularly during the 1980s, the Sino-Cambodian relationship deteriorated to its lowest point in history. Following 1997, their bilateral relationship took  a significant detour, with the gradual development of trust and confidence leading to increased political, military, and economic cooperation. China has provided substantial bilateral aid, and economic ties have significantly grown over the last two decades. Cambodia and China have enjoyed very strong economic and political ties under a comprehensive strategic partnership. China’s influence in Cambodia has rapidly increased, driven mainly by Cambodia’s development agenda and China’s strategic interests. Amidst this development, Cambodia has been accused of being a client state of China. So does Cambodia take shelter from China? And how does its foreign policy position tell us?

What Is Shelter Theory?

Shelter theory refers to the series of strategies that small states adopt to alleviate the inherent vulnerabilities of being small. It is a form of alliance relationship with great powers, regional, or international organizations whereby the small state yields effective control of its political decision-making in specific areas. Simply, it means that small states have to sacrifice their natural resources and political autonomy (decision-making) to receive protection in order to survive in the international system. Shelter theory is about the external dimension of the inherent involvement of an external relationship to minimize the risk or threat during the crisis or after the crisis. It is a unique form of alliance with great powers, regions, and international organizations, which focuses on four main aspects: political, security, economic and social shelter.

First, political shelter refers to small states yielding specific control on political decision-making in a specific area. By giving up political control to the bigger power, they gain political protection in return. Second, a security shelter involves a direct military security means such as hosting a military base in the small state’s soil. Third, economic shelter includes direct economic assistance from external powers to provide financial benefits, support, and incentives to smaller states in order to help them to survive. Lastly, social shelter involves diffusion of foreign people’s ideas to avoid social stagnation while the bigger power seeks to promote its culture in small states. Sometimes these four aspects come together when the bigger state has more control over the smaller state, allowing the former to have influence and control over these four aspects. However, shelter theory is not a new form of modern colonization because it is just an agreement between state and state without using force; that is, small states voluntarily seek protection from the bigger power and they can terminate it anytime. Shelter theory is not only limited to the state level as the international system can also provide shelter to smaller states as well.

The utmost strong ties of the Sino-Cambodian relations are always questioned by other foreign states regarding Phnom Penh’s overdependence on Beijing in the area of  politics, economy, and security. China’s presence in Cambodia has grown dramatically over  the previous two decades, especially in terms of foreign direct investment and military collaboration. Cambodia's Prime Minister Hun Sen has justified Cambodia’s strong ties with China, citing Beijing's huge financial contributions to his small country. China is Cambodia's most powerful political ally and the greatest donor of development aid, supplying billions of dollars into infrastructural projects. The Hun Sen administration called the criticism about Cambodia’s close alignment with China "unjust" while addressing remotely at Nikkei's Future of Asia conference, held in Tokyo last month. Additionally, he said, "If I don't rely on China, who will I rely on? If I don't ask China, who am I to ask?"

Cambodia has extensively and actively cooperated in China's One Belt One Road program (OBOR) since the economic growth opportunities generated by this initiative are thought to be enormous. With Chinese assistance, more than 2,000 kilometers of roads, seven major bridges, and a new container terminal were built at the Phnom Penh Autonomous Port by the end of 2017. Nearly 3 billion dollars has been invested in authorized airport projects including  a new international airport in Siem Reap, the Dara Sakor International Airport in Koh Kong province, and an international airport in Kandal province. The state-owned China Communications Construction Company sponsored the 2-billion dollar Phnom Penh-Sihanoukville Expressway Project, now under construction. Moreover, more than 7.5 billion dollars has been invested in hydropower facilities, and around 4 billion dollars has been invested in coal power plants. China has also invested in approximately 30 agricultural and agro-industrial projects in the energy sector.

Besides, China has also invested in constructing the Sihanoukville Special Economic Zone (SSEZ), which has attracted more than 100 enterprises from China and other nations, with a total investment of more than 3 billion dollars as of 2017. The SSEZ has produced approximately 20,000 jobs in the local community. Apart from this, Cambodian Prime Minister Hun Sen paid a special visit to Beijing in early 2020, in the midst of a coronavirus outbreak, to show China Cambodia's full support in the fight against the outbreak. During their conversation, President Xi told Prime Minister Hun Sen that “a friend in need is a friend indeed,” referring to the fact that Cambodia  stands with China  at this critical time.

While Cambodia is experiencing an intense coronavirus outbreak, Prime Minister Hun Sen mentioned the importance of making COVID-19 vaccinations widely available and removing barriers to the cross-border flow of medical goods and services. "Without assistance from China," he also claimed, "maybe we will not have vaccines for our people.” According to the Cambodian government, all Chinese investments and infrastructure development projects in Cambodia have been made transparently, openly, and inclusively. It also claimed that the Chinese debt is manageable. However, Cambodians are increasingly concerned about China's growing dominance. Despite the economic benefits, too much reliance on China carries a high level of commitment and danger. Reliance on Chinese funding might lead Cambodia into a debt trap, resulting in a loss of sovereignty and deterioration of relations with other ASEAN members. In Cambodia, the lack of openness and accountability of China's initiatives is producing social and environmental problems. Civil society actors frequently complain that Chinese firms are racing to exploit Cambodia's resources while ignoring international best development practices.

Despite fierce criticism, Cambodia has always interpreted the language of its foreign policy by standing on the principles of neutrality and non-alignment, that is,  adopting a middle position. Cambodia has pursued a multi-vector foreign strategy rather than focusing solely on one power. Being a small country sandwiched between two larger and more powerful countries, it maintains its foreign policy of permanent neutrality and non-alignment and pursues a policy of peaceful coexistence with its neighbors as well as with other nations around the world. Cambodia has also tried to make as many friends as possible. Its foreing policy is driven by its  primary goal to maintain political stability, peace, and social order in order to achieve human dignity, economic prosperity, and poverty alleviation.

There have been accusations that Cambodia allows China to place military bases on its land. However, Hun Sen and senior government officials have denied any plans to do so at a naval base where the Chinese government is assisting in the expansion of facilities. Hun Sen  cited Cambodia's Constitution, which states that foreign military outposts are not permitted within the country. He went on to say that any country may deploy ships to Cambodia, reflecting his sentiments on development aid that Cambodia always welcomes. "We do not close the door to anyone in accepting assistance for building the country," he said. Basically, Cambodia really needs protection from China; however, the Cambodian government may not want to do so,  as it can jeopardize Cambodia’s long-term interests.

To conclude, I do not think Cambodia wants to go in that direction as we need to think about our long-term interests and future. Obviously, Cambodia wants to take shelter from China but we truly understand the risk of depending only on China. No doubt, Cambodia needs ASEAN and its neighbors. Cambodia does not want to be too dependent on China and under the protection of China forever. I believe this is what the government of Cambodia is trying to do and for sure Cambodia needs China now, yet Cambodia also needs other countries as well. Cambodia has its own policy and strategy to justify its partners. Cambodia wants to make more friends and be nice to all powers, be it China, the US or other countries.

Cambodia as ASEAN Chair in 2022 From A Youth Perspective