What Can Cambodia Do to Avert the Microfinance Crisis? 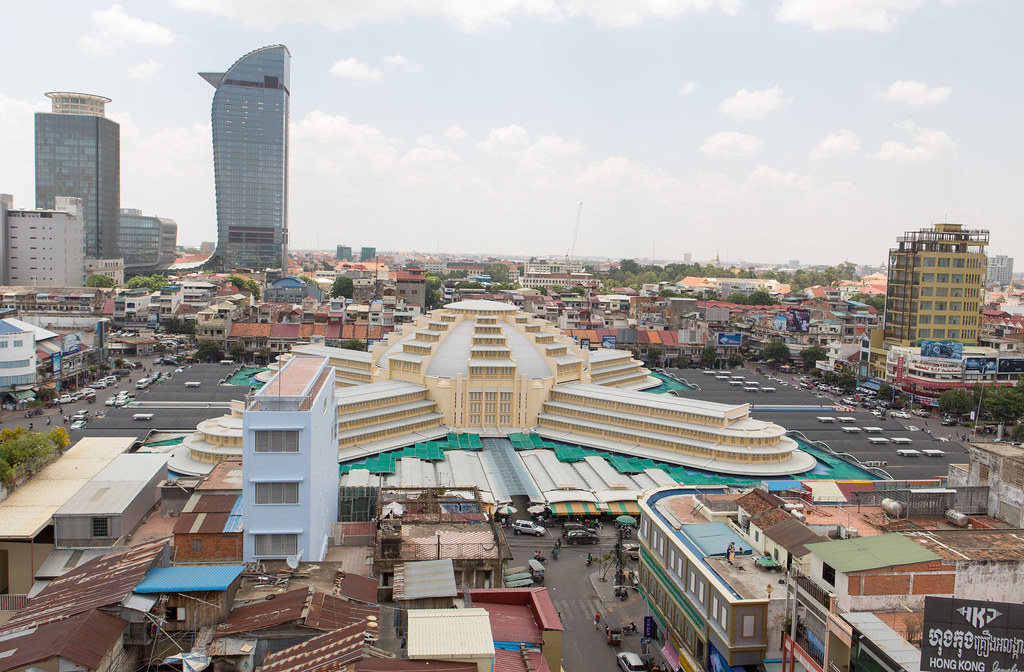 Microfinance has become a new paradigm of development in terms of poverty alleviation and financial inclusion. It is because the services reach out to households who commonly can access traditional commercial banking services, of whom include low-income, self-employed, or informally employed individuals, with limited or no ownership titles on their assets and formal identification papers.

In Cambodia, microfinance institutions (MFIs) have continued to gain momentum over the past two decades. This sector previously emerged as a non-profit microcredit project in the early 1990s to fill in the non-existent banking services with support from the government and financial aid from international donors and non-governmental organizations (NGOs). 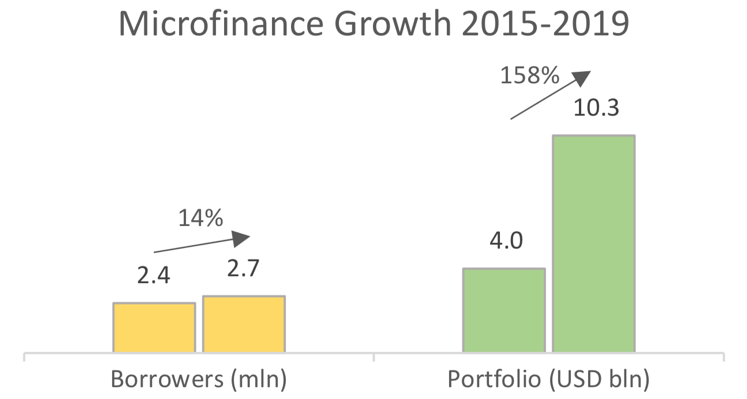 increasing only 14% in the same four-year period. By the end of 2019, more than 2.6 million Cambodians held more than USD 10 billion in microloans with an average of USD 3,804 per person, becoming far exceeding the GDP per capita of the country and the highest microloan size in the world.

With years of economic disruptions caused by the Covid-19 pandemic and the partial withdrawal of the European Union’s Everything But Arms (EBA) trade preferences in August 2020, it has become apparent that microloans in Cambodia are accumulating to unsustainable levels.

Both borrowers and lenders engender the unsustainable growth of microcredit. On the demand side, microloans —mostly collateralized by borrowers’ land or house titles — are taken to accommodate the households’ basic needs rather than support income generation. It has put them at risk of losing their lands and human rights abuses. On the supply side, some MFIs exploit the lending practices of microloans by charging high interest rates, demanding land titles as collateral, and targeting impoverished clients who are vulnerable to land loss. Microfinance trends in Cambodia over the past five years include the tenfold increase of average loan as well as the share of loans for consumption needs, and the portfolio-at-risk due to the poor penetration of financial instruments, deteriorating lending practices, and low financial literacy.

A few trends from MFI borrowers have become noticeable as well. Any families unable to pay their debt and unwilling to lose their lands pull their children from school and force them to take a job or send them abroad to earn income. Due to Covid-19, many workers become jobless and can't send back remittance home, which is the most common source of repayment, will force indebted households to sell their land or give up on their land listed as collateral.

Cambodia’s microfinance market is highly saturated. Between 2016 and 2019, the data on the number of loans disbursed by size reveals another intriguing development. The share of the small loans between $500 to $1,000 increased significantly while the volume of the smallest loans below $500 decreased dramatically.

At the same time, the share of bigger loans from $5,000 to $20,000 doubled, and above $20,000 tripled. This data suggests a dangerous situation in which the industry competition is significantly based on larger loan sizes for big enterprises and wealthier households rather than expanding the reach to the lowest-end groups. 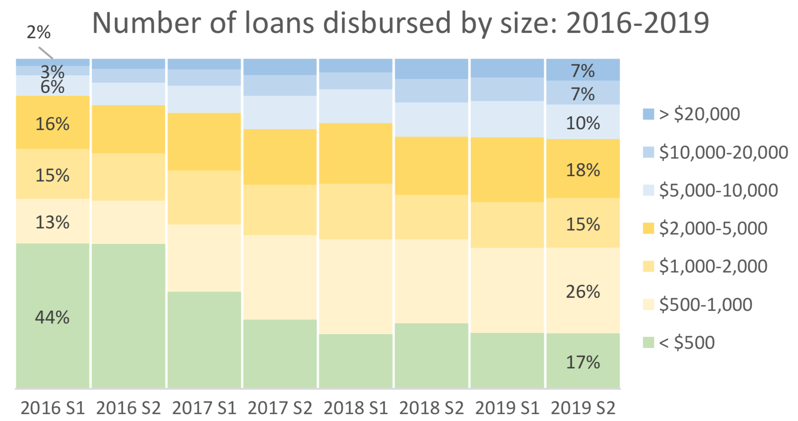 Household consumption remains the primary purpose for borrowers to take on microfinance loans, followed by agricultural activities, consumer durables purchase, and the purchase/improvement of dwelling. Borrowers tend to see microfinance loans as easy money that they can borrow to spend on basic needs or residences and consumer durables to upgrade their lifestyles, all of which are not profitable. This improper use of loans can induce enormous social and economic consequences of over-indebtedness, and default rates loom large because of the covenant practice from MFIs in which borrowers listed their land title as collateral. 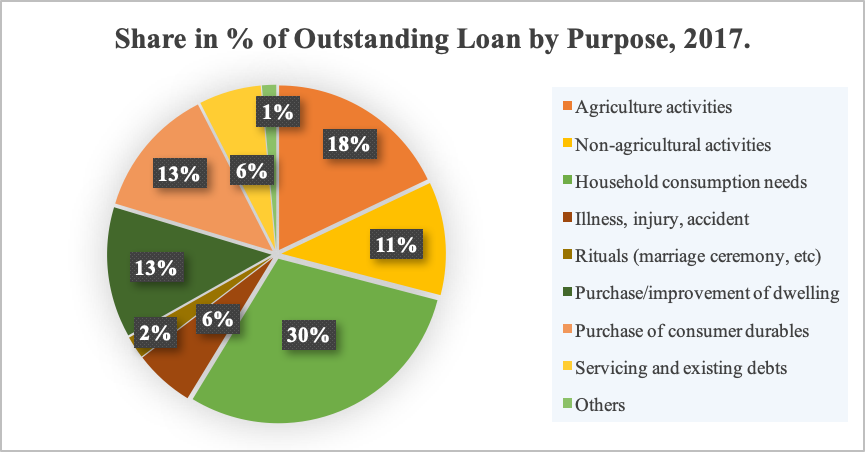 Concerning the unprecedented time of the Covid-19 pandemic, there are short-term and long-term recommendations to address the issues. Regarding the long-term strategy, there are pivotal approaches to mitigating the consequences on the poor and the economy, which can be applicable for both the demand side and supply side of the microfinance industry.

The short-term action should be the immediate interventions from the Royal Government of Cambodia (RGC) and the National Bank of Cambodia (NBC) on loan repayments and interest accrual that have become the biggest concerns of millions of microfinance borrowers in Cambodia. After the pandemic first hit Cambodia, the government has not yet laid out any effective regulation or policy to ease the burdens of borrowers. In March 2020, the RGC urged banks and MFIs to delay repayment due dates and refrain from confiscating the property of any borrowers affected by the pandemic. The NBC provided more liquidity to specialized banks and MFIs, allowing them to lower interest rates and restructuring loans for borrowers in four vulnerable areas: (1) tourism (including hotels, guest houses, restaurants, food and beverage suppliers, service activities, and other support services); (2) textile and garment manufacturing (including employees); (3) construction (exclusively for first-time house/shop owner loans and mortgages); and (4) transport (specifically taxi drivers and tuk-tuk drivers) and logistics, all of which were valid until 31 December 2020. These requests did not clearly define the characteristics of borrowers that would be qualified and clarify what kind of relief to offer, which left room for financial institutions to conduct their measures for restructuring loans. Thus, the RGC and NBC must promptly share the economic burdens of borrowers by issuing practical policies on suspending loan repayments and interest accrual with a specific guideline on characteristics of beneficiaries, types of relief to offer, and institution responsibility.

Meanwhile, the long-term strategy involves promoting financial literacy on the demand side and scrutinizing the regulation on lending practices on the supply side. Boosting financial literacy among people, in general, should be a necessary step for the RGC and NBC. Policymakers also need to work closely with relevant stakeholders that can effectively promote financial literacy. The NBC can first begin by forging a partnership with the Ministry of Education, Youth, and Sport to integrate financial literacy subjects into the primary and high school curriculum. The two institutions signed a Memorandum of Understanding (MoU) in 2019, but it needs more engagement and measurement to ensure successful implementation, especially after schools go online.

Likewise, NBC should also collaborate with the Ministry of Labour and Vocational Training (MoVT) to expand its project reach to the workforce. According to the Standard & Poor’s Rating Services Global Financial Literacy Survey conducted in 2015, only 18% of Cambodian adults are financially literate. It means the MoVT appears to be a suitable counterpart of NBC in promoting financial literacy to the adult population.

I also want to touch upon the use of technology as it is one of the challenges facing many Cambodians, which has long been hindering their access to education. NBC has to include international organizations and non-governmental organizations as chief stakeholders because they have the financial and technical capacity to promote financial literacy.

Last but not least, the RGC and NBC have the task to regulate the microfinance sector before the imminent problems turn ungovernable. In addition to that, there should be effective regulation of the interest rates. In 2017, the Cambodian government capped microfinance industry interest rates to 18% just months before the Commune/Sangkat elections. There have been debates whether this action was to help microfinance borrowers or politically motivated. Many scholars have already claimed it was a political stunt without proper consideration of the consequences. They further argue that the lower interest rates induce borrowing and increase the debt burden among small borrowers. The lending practices of MFIs need to be closely reviewed and revised if necessary to tame the microfinance sector in Cambodia. If this sector remains loosely monitored, many borrowers, especially the poor, will continue to be exploited and abused by the MFIs. Ultimately, the microfinance industry has become unsustainable based on the massive growth of portfolios beyond comparison to the expansion of gross national income per capita in the last few years. Fear of insolvency soars among the poor as debt repayment becomes more threatening to their livelihood than getting infected by Covid-19. It is true that these people are among the hardest-hit who have been waiting for effective intervention by the government to relieve their burdens.

All in all, the absence of basic financial literacy skills necessary for making informed financial decisions and management has been a significant culprit of the debt crisis. It, of course, also allows MFIs to exploit borrowers and might dangerously embolden households to take on loans without specific and proper plans for spending and repayment.