Corruption in Cambodia: Causes, Impacts and Ways Forward to Eliminate It 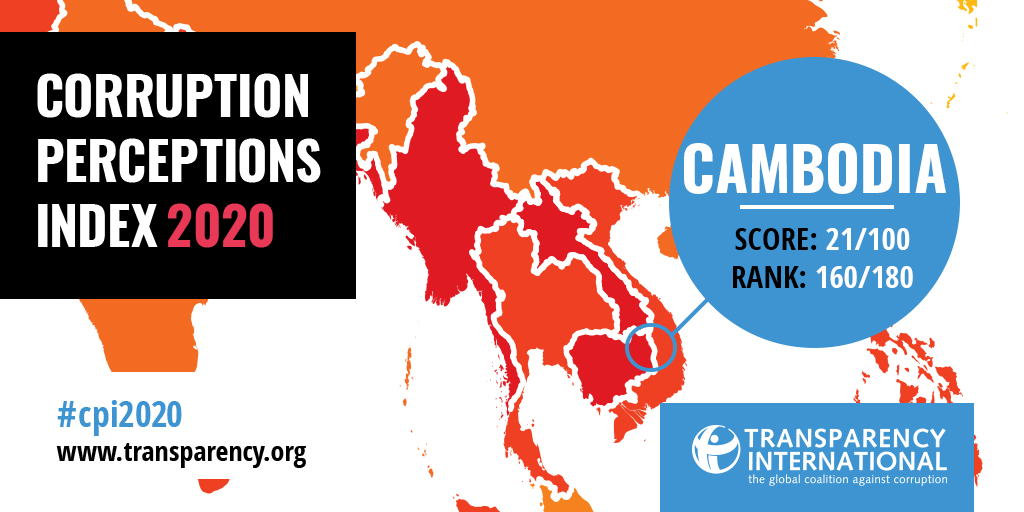 The Government of Cambodia has made some progress  in combating corruption through three means such as education, prevention, and legal implementation. Education is used to educate, inspire and disseminate anti-corruption laws as well as to show the impact of corruption and the role of civic participation  in reducing and eradicating corruption. Prevention measures have simultaneously been introduced alongside education to discourage people from committing corruption. Law enforcement also goes hand in hand with prevention​ and education measures.​ The grievance redressal mechanism has received a generally positive evaluation from the plaintiffs. However, despite what has been done, corruption is still pervasively practiced in Cambodia. According to the Transparency International’s 2020 Corruption Perception Index, Cambodia received a score of 21 out of a total 100 points. Despite an improvement of one point since 2018, the report placed Cambodia at number 160 in the global ranking among 180 countries and territories. Considering this rank, Cambodia’s corruption seems very deeply rooted, systematic, and hard to eliminate.

The causes of corruption in Cambodia

There are many factors which contribute to corruption in Cambodia, but based on my observation, there are four key factors. First, the culture of corruption. As we can see, Cambodian people normally perceive that giving an unofficial fee in order to get things done fast is just a gift for public officers; they normally don't  think it  is a kind of corruption but just “tea money”. Also, some people of course offer unofficial fees to public officers even when not being requested to do so if everything goes well for them.

Second, it is a lack of law enforcement. For instance, the law enforcement is not really effective and efficient since those who implement the law often get bribed from people who are committing crimes, so criminal cases are often ignored and law abusers are allowed to go free to carry out their wrongdoing again.

Specifically, in the case of business, as reported by Transparency International Cambodia, “53 participants think that the lack of law enforcement is a factor that engenders the payment of unofficial fees. The lack of law enforcement engenders the payment of unofficial costs on a day-to-day basis, for example with the inspections, as well as in the registration process. Lack of law enforcement also contributes significantly to the fact that a large number of companies are unregistered and do not pay taxes.” Besides, those who did not register just claimed that it was too tortuous or too costly for registration which was not balanced to the income they could earn. Indeed, most small medium enterprises run in unofficial ways, so officials just tolerate them because they can take advantage of this as well. This is not to mention other sectors, but we can see that it is operating in similar ways.

Third, a lack of an independent and effective judicial system is also a  factor which perpetuates corruption. The judicial system is often of little help to victims of corruption. According to the 2020 Global Corruption Barometer, Cambodian citizens perceive the judiciary as the sector most affected by corruption after police, local government councilors, and government officials. The judiciary has proclaimed its independence, but this is just only on paper. As we can see, all judges and all prosecutors are appointed by the Cambodian People’s Party which is the ruling party right now, and there are a lot of examples that show cases of executive interference. For example, judges get intimidated by security forces, and there have been cases of “arbitrary dismissal of judges, [and] charges being dropped after the executive’s intervention.”

Based on a report by Transparency International Cambodia, “53 interviewees were of the opinion that the weak judicial system in the country is an important factor that contributes to the payment of unofficial fees. Furthermore, only a third of the participants said that they would use the court system if they had an important corruption problem. The lack of an effective judicial system therefore contributes to the lack of accountability of many people.”

Fourth, the lack of transparency and accountability is another cause of  corruption as well. As I have often seen, public officials not do not really adhere to their roles and obligations. They may not think that they have the role to serve the public. Thus, they normally commit corruption to serve their self-interest. For example, according to the Transparency International Cambodia’s report ,“48 interviewees thought that they had to pay unofficial fees during the registration process, 22 of them thought they did not have to do so, while the rest did not know about the registration process. Some interviewees mentioned that they would register their company as soon as the online process works. One of the interviewees recently registered her company by herself, referring to the form online but indicating that it did not work.” All of these show the lack of transparency and accountability of public officials, so whether we want it or not, corruption is set to occur.

Impacts of corruption on people’s lives and Cambodia’s development

Corruption negatively impacts the daily lives of people. Our freedom, dignity, value, and livelihood will be damaged when corruption does not decrease in our country. For example, when money for the public interest has been stolen to serve self-interest or personal benefits only, our life will be full of darkness, inequality, and injustice since the state budget which should serve the public interest goes to a group of people or individuals who hold power or have the opportunity to commit corruption.

Moreover, it erodes democratic freedom, the rule of law and trust in the government. Corruption reduces our chances for a healthy environment and sustainable future. For instance, when money meant to tackle the climate crisis is stolen, that’s our future being taken from us. When money meant to improve our local schools, hospitals, and roads is snatched away, opportunities for a better life are lost with it. When money meant to improve our government and rule of law is stolen, so too is our chance for a more just and secure future.

Furthermore, when we want to access public services such as public schools, public clinics, identity documents, and health centers, but we are required to pay a bribe or use the connection to get things done while all of these are free for all people, we will continue to suffer from inequality and impacts of corruption.

According to the 2020 Global Corruption Barometer, 37% of Cambodian people paid a bribe and 6% used personal connections for public services. If you are rich, it’s fine to offer bribes to public officials, but what if you are poor, how can you get access to the public service in an equal and efficient manner. This issue is really concerning and common in Cambodian society as well.

What can we do to eliminate it?

Furthermore, empowering the citizens is a long-term approach to fight against corruption. When people are empowered, there will be an increase in demand for anti-corruption and for holding the government more accountable. Also, this is how we can fabricate the reciprocal confidence between the citizens and the government. For instance, citizens can initiate community monitoring frameworks which can help to detect and reduce corruption as well as improve the quality of the public service.

In conclusion, corruption exists everywhere, and it is undeniable that no state is free from corruption. However, the difference is that some countries have a high percentage of corruption while others can keep corruption under control. As our country has a bad record of corruption, it is crucial we find ways to jointly subvert it. Corruption is a true enemy to development, and our nation will not have a bright future with rampant corruption. As US President Joe Biden once said, “Corruption is a cancer: A cancer that eats away a citizen’s faith in democracy, diminishes the instinct for innovation and creativity.” To eliminate it, it starts from each of us because we are the change agent; we cannot wait for others to do it for us since it is unlikely to happen. The fight against corruption starts with all of us!